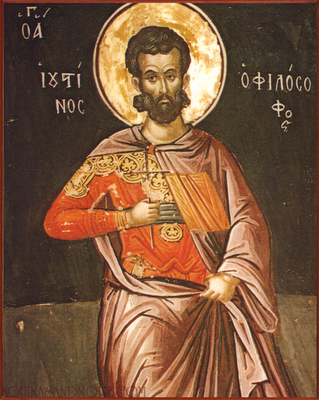 The following quotes are taken directly in unaltered form from The sections on Nonresistance and Love in A Dictionary of Early Christian Beliefs; A Reference Guide to More Than 700 Topics Discussed by the Early Church Fathers edited by David W. Bercot. *Key: Quote in italics. -Author (Date written, Easter/Western writer) Volume number . Page number in Ante-Nicene Fathers.

They comfort their oppressors and make them their friends. They do good to their enemies. -Aristides (c. 125, E), 9.276

We will not ask you to punish our accusers. Their present wickedness is sufficient punishment. -Justin the Martyr (c. 160, E), 1.165

We have learned not to return blow for blow; nor to go to law with those who plunder and rob us. Not only that, but to those who strike us on one side of the face, we have learned to offer the other side also. -Athenagoras (c. 175, E), 2.129

He commanded [His followers]... Not only not to strike others, but even, when they themselves are struck, to present the other cheek... [He commanded them] not only not to injure their neighbors, nor to do them any evil, but also, when they are dealt with wickedly, to be long-suffering. -Irenaeus (c. 180, E/W), 1.408

The philosophers will then with prosperity be taken up in a friendly exposure... But not in the manner of avenging ourselves on our detractors. Rather, it will be for the purpose of their conversion. For vengeance is far from being the case with those persons who have learned to bless those who curse. -Cement of Alexandria (c. 195, E), 2.347

The spiritual man never cherishes resentment or harbors a grudge against anyone - even though deserving of hatred for his conduct. -Clement of Alexandria (c. 195, E), 2.540

Paul does not merely describe the spiritual man as being characterized by suffering wrong, rather than doing wrong. Rather, Paul teaches that a Christian does not keep count of injuries, For Paul does not allow him even to pray against the man who has done wrong to him. For he knows that the Lord expressly commanded us to pray for our enemies. -Clement of Alexandria (c. 195, E), 2.548

Christians are not allowed to use violence to correct the delinquencies of sins. -Clement of Alexandria (c. 195, E), 2.581

Hippias [a pagan] is put to death for laying plots against the state. No Christian ever attempted such a thing on behalf of his brethren, even when persecution was scattering them abroad with every atrocity. -Tertullian (c. 195, W), 3.51

The practice of the old law was to avenge itself by the vengeance of the sword. It was to pluck out "eye for eye," and to inflict retaliatory revenge for injury. However, the practice of the new law points to clemency. -Tertullian (c. 197, W), 3.154

Men of old were used to requiring "eye for eye, and tooth for tooth" and to repay evil for evil, with usury! ... But after Christ has supervened and has united the grace of faith with patience, now it is no longer lawful to attack others even with words, nor to merely say "fool," without danger of the judgment. ...Christ says, "Love your enemies and bless your curses, and pray for your persecutors." -Tertullian (c. 200, W,) 3.711

If someone attempts to provoke you by physical violence, the admonition of the Lord is at hand. He says, "To him who strikes you on the face, turn the other cheek also." Let outrageousness be worn out by your patience. Whatever that blow may be, joined with pain and scorn, it will receive a heavier one from the Lord. -Tertullian (c. 200, W), 3.712

For what difference is there between provoker and provoked? The only difference is that the former was the first to do evil, but the latter did evil afterwards. Each one stands condemned in the eyes of the Lord for hurting a man. For God both prohibits and condemns every wickedness. In evil doing, there is no account taken of the order. ... The commandment is absolute: evil is not to be repaid with evil. -Tertullian (c. 200, W), 3.713

Christ plainly teaches a new kind of long-suffering, when He actually prohibits the reprisals that the Creator permitted in requiring "an eye for an eye, and a tooth for a tooth." -Tertullian (c. 207, W), 3.370

The Lord will save them in that day - even His people - like sheep. ...No one gives the name of "sheep" to those who fall in battle with arms in hand, or those who are killed when repelling force with force. Rather, it is given only to those who are slain, yielding themselves up in their own place of duty and with patience - rather than fighting in self-defense. -Tertullian (c. 207, W), 3.415

[Celsus, a pagan critic,] says, "They also have a teaching to this effect: that we should not avenge ourselves on one who injures us." Or, as Christ expresses it: "Whoever will strike you on the one cheek, turn the other to him also." -Origen (c. 248, E), 4.634

When a Christian is arrested, he does not resist. Nor does he avenge himself against your unrighteous violence - even though our people are numerous and plentiful. -Cyprian (c. 250, W), 5.462

We may not hate. And we please God more by rendering no return for wrong. Therefore, we exhort you to make satisfaction to God. Do this while you have the power, while there yet remains in you something of life. ... We do not envy your comforts, nor do we conceal the divine benefits. We repay kindness for your hatred. In return for the torments and penalties that are inflicted on us, we point out to you the ways of salvation. -Cyprian (c. 250, W), 5.465

The Christian has departed from rage and carnal contention as if from the hurricanes of the sea. He has already begun to be tranquil and meek in the harbor of Christ. Therefore, he should allow neither anger nor discord within his breath. For her must neither return evil for evil, nor bear hatred. -Cyprian (c. 250, W), 5.488

Do no one any injury at any time; provoke no one to anger. If an injury is done to you, look to Jesus Christ. And even as you desire Him to forgive your transgressions, also forgive others theirs. -Theonas of Alexandria (c. 300, E), 6.161

Religion is to be defended - not by putting to death - but by dying. Not by cruelty, but by patient endurance. Not by guilt, but by good faith. For the former belongs to evil, but the latter to the good. ... For if you wish to defend religion by bloodshed, tortures, and guilt, it will no longer be defended. Rather, it will be polluted and profaned. ... And, therefore, when we suffer such impious things, we do not resist even in word. Rather, we leave vengeance to God. We do not act as those persons who would have it appear that they are defenders of their gods, who rage without restraint against those who do not worship them. -Lactantius (c. 304-313, W), 7.157, 158

If we all derive our origin from one man whom God created, we are clearly of one blood. Therefore, it must be considered the greatest wickedness to hate a man - even if he is guilty. On this account, God has forbidden us to ever contract enemies. Rather, they are to be eliminated, so that we sooth those who are our enemies by reminding them of their relationship. For, if we are all inspired and quickened by one God, what else are we except brothers? ... Therefore, they are to be considered as savage beasts who injure man, who - in opposition to every law and right of human nature - plunder, torture, slay, and banish. On account of this relationship of brotherhood, God teaches us never to do evil, but always good. -Lactantius (c. 304-313, W), 7.172, 173

The Christian does injury to no one. He does not desire the property of others. In fact, he does not even defend his own property if it is taken from him by violence. For he knows how to patiently bear an injury inflicted upon him. -Lactantius (c. 304-313, W), 7.160

If anyone should be so shameless as to inflict injury on a good and just man, such a man must bear it with calmness and moderation. He will not take upon himself his revenge. Rather, he will reserve it for the judgment of God. He must maintain innocence at all times and in all places. And this commandment is not limited to merely his not [being the first to] inflict injury on another. Rather, he should not even avenge it when injury is inflicted on him. For there sits on the judgment-seat a very great and impartial Judge. -Lactantius (c. 304-313, W), 7.183

Why do contests, fights, and contentions arise amongst men? Is it because impatience against injustice often excites great tempests? However, if you meet injustice with patience, then no virtue can be found more true. ... In contrast, if injustice... Has met with impatience on the same level as itself... It will ignite a great fire that no stream can extinguish, but only the shedding of blood. -Lactantius (c. 304-313, W), 7.184

In what respect then, does the wise and good man differ from the evil and foolish one? Is it not that he has unconquerable patience, of which the foolish are destitute? Is it not that he knows how to govern himself and to mitigate his anger - which those are unable to curb because they are without virtue? ...What if a man gives way to grief and anger and indulges these emotions (which he should struggle against)? What if a man does not fulfill the duty of virtue. For he who ties to return an injury desires to imitate that very person by whom he has been injured. In short, he who imitates a bad man cannot be good. -Lactantius (c. 304-313, W), 7.184

"An eye for an eye, and a tooth for a tooth." That is the expression of justice. However, His injunction that a man who is struck on the one cheek should offer the other also - that is the expression of goodness. Now, are justice and goodness opposed to each other? Far from it! Rather, there has only ever been advancement from simple justice to positive goodness. -Disputation of Archelais and Mans (c. 320, E), 6.216

Loving one's enemies does not mean loving wickedness, ungodliness, adultery, or theft. Rather, it means loving the thief, the ungodly person, and the adulterer. Not as far as he sins (in respect of the action by which he stains the name of man), but as he is a man and is the work of God. -Clement of Alexandria (c. 195, E), 2.426

Our religions commands us to love even our enemies, and to pray for those who persecute us... For everyone loves those who love them. It is unique to Christians to love those who hate them. -Tertullian (c. 212, W), 3.105

What else is the preservation of humanity than to love a man because he is a man and the same as ourselves? ...If it is contrary to nature to injure a man, it must be in accordance with nature to benefit a man. And he who does not do this deprives himself of the title of a man. -Lactantius (c. 304-313, W), 7.175

T.G. Blankenship
Travis lives in Vancouver, WA with his wife Caresse and son Wesley. He has a B.S. in Pastoral Ministries and a M.A. in Biblical Studies and serves on staff at a local church.

When Jesus was in the garden of Gethsemane he wrestled with the Father over his inevitable suffering. We wrestle with God daily as he gives us cup after difficult cup in life.
This is a place to acknowledge the cup we've been given to drink (being awake and vigilant unlike the disciples were that night) and to gulp it down, even if reluctantly. This is a place to sweat blood as we work out our salvation with fear and trembling.
Gethsemane is a place where theology, ecclesiology, ethics, daily living, politics, and all pursuits of humanity collide with Jesus Christ so that we might know and embrace God's redemption for the world.